The Foote School’s Drama Program provides students with an understanding of the importance of drama as an expression of the human experience, as well as with an appreciation of the role of the many forms of theater in cultural literacy.

Drama fosters creativity, giving students the opportunity to improvise, act on a stage and write plays, as well as participate in the technical aspects of the theater. Learning the discipline and craft necessary for this constructive creation builds numerous skills, among those the crucial abilities to reason, make important decisions, and solve problems.

The drama program provides students with tools for critical assessment of what they read, see, and hear, with models and standards of excellence, and with a sense of the emotional power of theater — its ability to stir and inspire an audience. Finally, and of paramount importance, because theater illuminates the constancy of the human condition, its study furthers the students’ understanding of themselves.

To create an environment conducive to drama, certain behavioral objectives must be met. These objectives are important for the development of attitudes that contribute to individual growth and effective group functioning. They include: 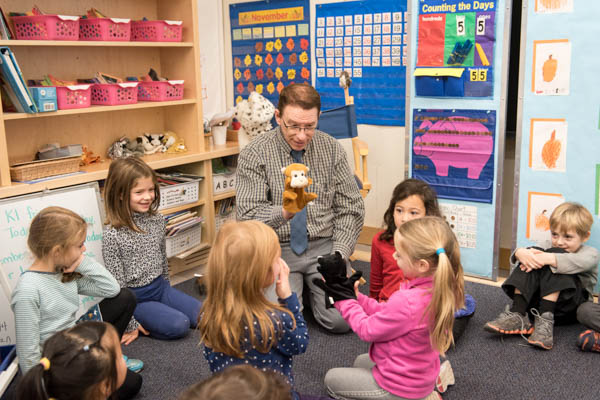 Kindergarten drama lessons focus on the idea that drama is about the use of the imagination and pretending. Through games, participatory stories, and pantomime, children are encouraged to use their observational and listening skills and sensory recall to enact small moments and scenes. Creativity, collaboration, and cooperation are incorporated into activities, as children discover the ways that movement and gesture can convey an idea or a concept. 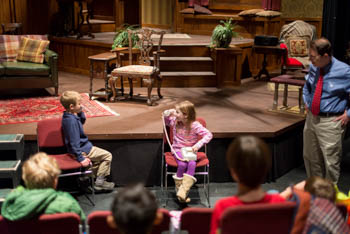 In first grade drama classes, children continue to expand on imagination and expression. Students explore the range of facial movements that characterize emotions, and they practice using their voices and bodies to convey feelings and reactions. They work together to create imaginary environments, and they act out simple storylines. Students experiment with walking style, voice and other behaviors to bring characters to life onstage. 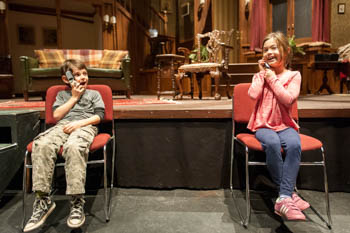 Second grade drama classes build on the skills of observation and imagination that were introduced in previous years. Children use all of their senses to immerse themselves in dramatic situations. Some lessons challenge students to identify sounds and then create imaginary settings in which those sounds would be heard. Other activities involve envisioning larger scenes, with children working together to create scenarios. 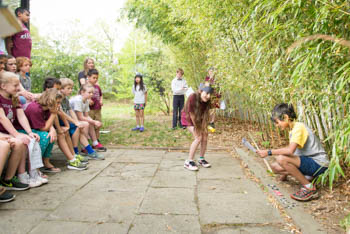 In third grade drama, students participate in increasingly elaborate theatrical activities. By repeating scenes and adding more and more elements (dialog, music, etc), they build their understanding of the complexity of stage productions. Students work together to creating a sequence of actions that form a plot. They respond to challenges that require quick thinking to adapt to the needs of a moment, and combine logic with creativity to develop believable characters and situations. 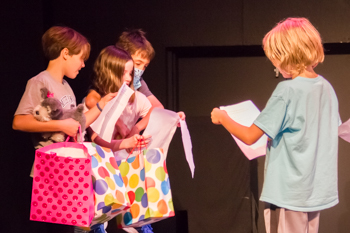 Drama classes reinforce fourth graders' growing skills in stamina, literacy, and comprehension. Lessons emphasize focus, concentration, and memorization as the students participate in longer scenes. They engage in storytelling and plot construction, define and give examples of ethical concerns, and analyze selections for important components of a plot (e.g. inciting moment, rising action, climax, falling action, denouement, conclusion). Some projects involve creating a conflict and a resolution for that conflict. Students also begin learning about offering critique: how to look for positive components of planning and performance, and how to suggest improvements for unclear or ineffective areas of performance. 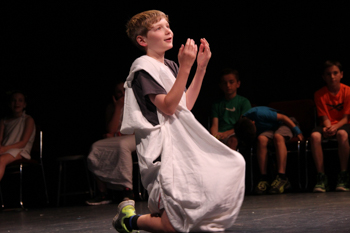 Group work is a core aspect of fifth grade drama. Theater lessons challenge students to collaborate in a variety of ways: to solve a problem requiring physical dexterity and logic, to create characters through the use of body and voice, and to work as an ensemble. Self-monitoring skills such as concentrating and focusing, thinking quickly, using the creative imagination, and adapting to the needs of a situation are encouraged. Fifth graders work together to write and perform a mystery using costumes, props and creating a simple set. 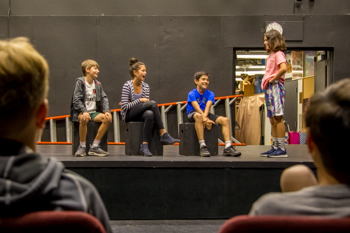 Improvisation is one of the unifying themes of sixth grade drama. Students learn the basic rules of improvisation and discussion techniques. Class activities include creating characters using voice and body movements, problem solving, creating sets, using appropriate props and using costumes. Students begin writing plays that incorporate dialogue, stage directions, plot, conflict, characters and editing. They learn and implement rehearsal techniques and analyze their own work, as well as the performances of their classmates. The collaborative process involves respecting various perspectives and points of view. 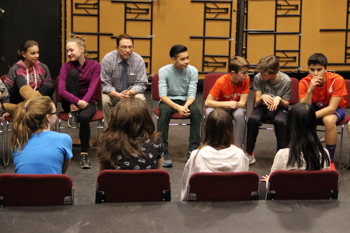 Students participate in performance projects that visually represent principles and theories about acting: improvisations to learn acting technique; flexibility, decision-making and problem-solving skills; theater games to learn concentration, thinking quickly and adapting to the needs of the moment. Students are also exposed to playwriting, dramatic literature and oral and written critical assessments. In seventh and eighth grades, students have the opportunity to participate as actors or members of the stage crew for a major production that is performed in our black box theater in December. 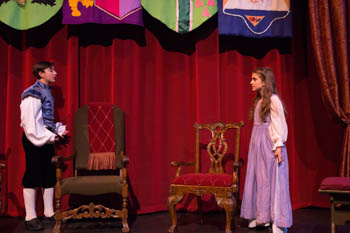 Much of the eighth grade year involves theater games that isolate and highlight specific skills. Students focus on the “believability” of a character or a scene, the reasoning and motivation for actions, the significance of entrances and exits, and the subtle interactions of various elements on stage. Students examine backstories, ethical dilemmas, and character development through the course of dramatic productions. The major eighth grade project is a scene study unit including literary analysis, blocking (charting movement), memorization, designing a set and costumes, performance and criticism. In seventh and eighth grades, students have the opportunity to participate as actors or members of the stage crew for a major production that is performed in our black box theater in December. 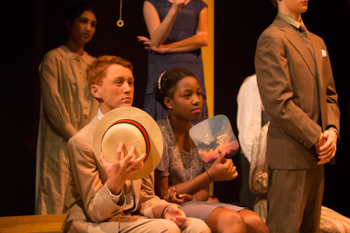 Ninth grade is the culmination of the drama program at Foote. Students spend this year studying and preparing a play for production. Usually, the play involves historic and cultural themes, and some class time is devoted to research and literary analysis of the time period, linguistic style and important contextual elements. Throughout the year, ninth grade drama classes incorporate the cumulative and sequential skills that students have learned during the course of their entire drama experience at Foote School. In-class lessons involve integrating all components of the production: organizing scenery, props and costumes (physical layout and changes during the performance); learning stage manager skills and "calling" the show; technical aspects of lighting, set construction, sound selection and making the score; and publicity.

The 7th/8th grade production, Harvey is a Pulitzer Prize winner. This popular comedy is about Elwood P. Dowd, considered the “perfect gentleman,” and his six-foot-tall invisible friend, a rabbit named Harvey! Elwood’s sister, Veta, and her daughter, Myrtle Mae, are so embarrassed by what they consider Elwood’s foolish antics that they attempt to have him committed to a sanitarium. By mistake, however, Veta is committed rather than Elwood, and the fun begins! Plot twists and a surprise ending result in laughter and a great theater experience that the whole family will enjoy.

The Miser by Moliere

Moliere is regarded at one of the theater’s top comic geniuses, and The Miser is one of his best works. The plot concerns the classic conflict of love and money. The miser, Harpagon, wants his daughter Elise, to marry a wealthy old man, Anselme, who, much to Harpagon’s delight, will accept her without a dowry. Elise, however, has her heart set on the penniless Valère.  Meanwhile, Harpagon himself has set his eye on young, impoverished Mariane, but he doesn’t know that his son Cléante also loves her! Harpagon’s stinginess sets off a chain reaction of hysterical situations, mistaken identities, and all-round great theatrical fun.

This will be the 40th year anniversary of this extraordinary six-week educational theater program for students from grade 7 upwards! Students can choose to perform or learn technical skills in construction, painting, costumes, props, and make-up.Foote Summer Theater is open to students from Foote and all other schools!

The name of the major musical to be presented will soon be announced.

Registration begins in February at which time a detailed description of the program and the instructors will be available on the Foote School website under summer programs. Enroll for a memorable summer of learning and fun!

There are no events to display 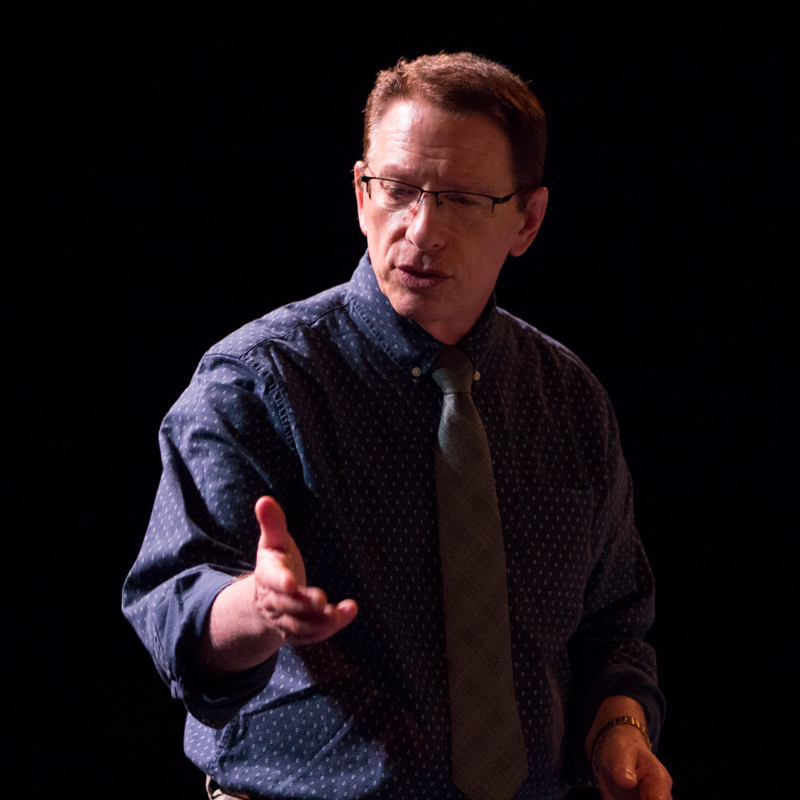 Julian Schlusberg is the Chair of Foote’s comprehensive Kindergarten through Grade 9 drama program and has been the Artistic Director of Foote’s Summer Theater Program for its entire 39-year history. He has received the John C. Barner National Theater Teacher of the Year Award, the Greater New Haven Arts Council Award, and was the first recipient of The Long Wharf Theatre’s Mary Hunter Wolf Award for Excellence in the Art and Teaching of Theater. He was the recipient of the Connecticut Drama Association’s Lifetime Achievement Award and Distinguished Service Award, and was twice honored by the Governor of Connecticut for his leadership in educational theater. He is the critically acclaimed author of Lessons for the Stage and Letters from the Prophets: A Theater Teacher's Memoir. Many of his students pursue successful careers in professional and educational theater, film, TV, playwriting, and technical theater.