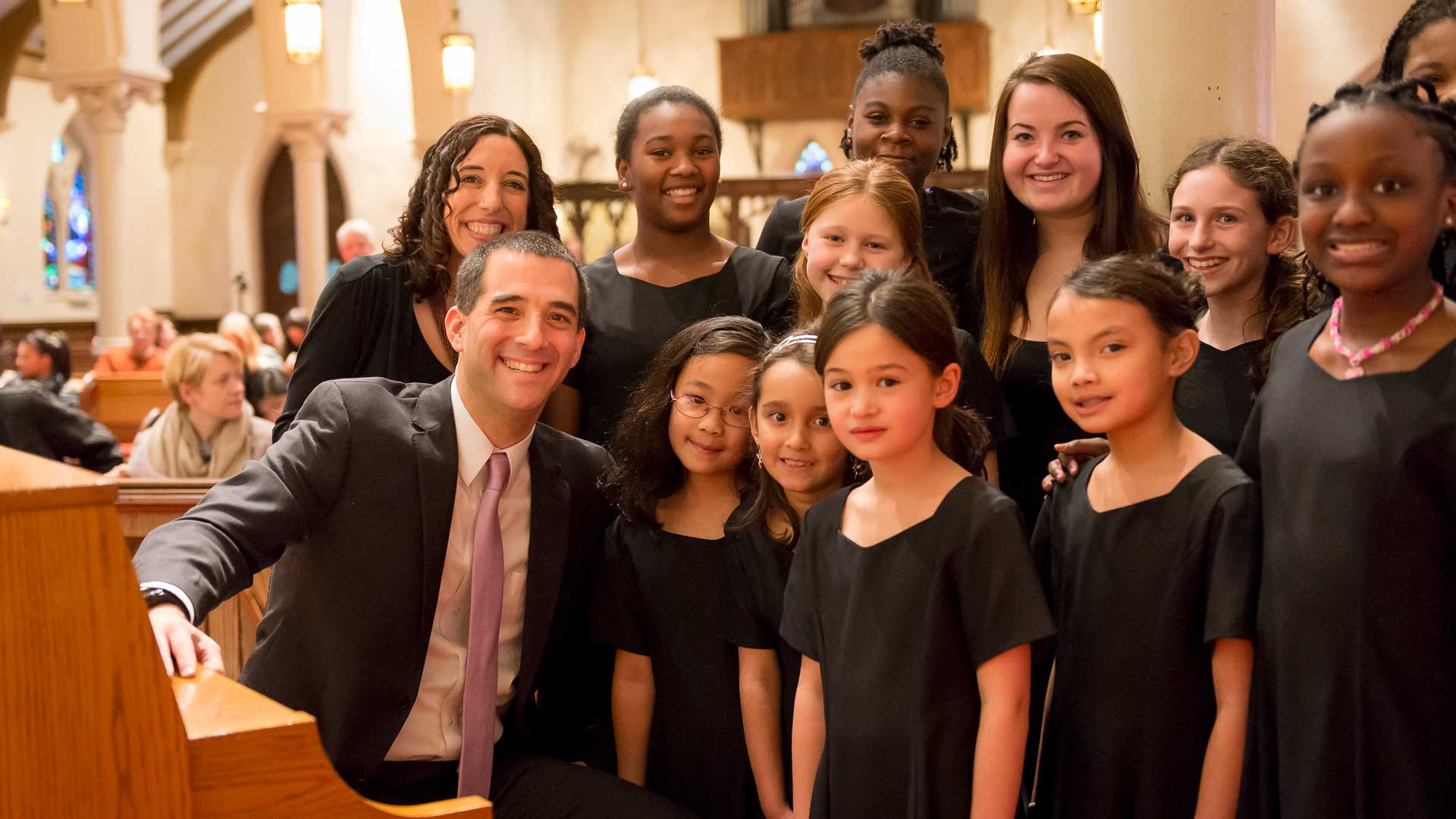 The Elm City Girls’ Choir started as a casual gathering of 16 girls in a New Haven living room, with Tom Brand ’88 at the piano leading them in song.

Over its more than quarter century, the organization has expanded to include 32 affiliated ensembles under the umbrella of the United Girls’ Choir and has given more than 4,500 girls ages 5 to 18 the opportunity to sing, conduct and become peer leaders in a supportive community.

Tom discovered his love of singing at age 9 when he joined New Haven’s Trinity Choir of Men and Boys, and his experience in that group inspired him to establish a girls’ choir program with a similar philosophy and goals.

Over the years, the Elm City Girls’ Choir has performed at Carnegie Hall, Lincoln Center and has toured in England, Puerto Rico and China. Despite those accomplishments, Tom says the music is secondary to the larger purpose.

“Although we certainly strive for artistic excellence, our most important goals really have nothing at all to do with music. We’re not just here to sing a chord precisely in tune, or even to hit all of the right notes. Our main purpose is much more humanistic. We’re here to be kind, loving and empathetic, to support one another, and to spread joy. Singing brings us together as a community and helps us accept and appreciate each other’s differences.”
True as that is, the girls are exceptionally talented and energetic performers, as anyone who has heard them can attest—a result of Tom’s belief that excellence and fun are not mutually exclusive.

Tom and his staff recruit choristers from dozens of schools in New Haven and the surrounding region. The program offers sliding-scale tuition, provides $150,000 a year in financial aid and has never turned away a family for an inability to pay.

Tom has developed new programs to give even more young people opportunities to sing, perform and gain leadership skills. He recently established the Saecula Choir Foundation, a nonprofit that sponsors an intergenerational choral institute, several performing ensembles and underwrites music education scholarships for students who would otherwise be unable to afford high quality musical training.

Those who have learned under Tom, or worked alongside him, say he’s a person of great musical talent whose passion and energy bring out the best in his choristers. Choir alumnae describe a sisterhood that developed their self-esteem, social skills and musical literacy while fostering lifelong friendships.

“Tom challenged me to be a better version of myself and supported me to achieve experiences far beyond my wildest imagination,” says Leah Suffern, an alumna of the Elm City Girls’ Choir who recently graduated from St. Olaf College, where she served as president of the college choir.

June Hale, a retired music teacher who has worked closely with Tom over the years, says he is a rare individual who “generates his own inspiration.”

“He bubbles over with great ideas, sorts through them to find those with true merit, and then proceeds to bring them to fruition—all in the time it takes most of us to wake in the morning, stretch, work the cobwebs out of our brains, and wonder what we should do with our day,” says June, who serves on Saecula Choir Foundation’s board.”

Indeed, Tom has big ambitions for the choirs and foundation, even as family life has brought new joys and responsibilities (he and partner Rebecca Rosenbaum have 18-month-old twin boys and an 8-month-old girl). He envisions a far-reaching choir program that gives every student in every school the opportunity to develop their musical talents.

“A lot of children in this country grow up without ever having an opportunity to sing in a choir—that’s not right,” says Tom. “We have to make it as accessible as a public library, which is to say free and open to all, with a bus route that takes you there.

“Singing together is one of the most wonderful things a group of people can do,” he says. “It’s an act of sharing our voices, no matter how modest they may be, with the goal of creating something beautiful, something powerful, something inspiring, something transformative.”