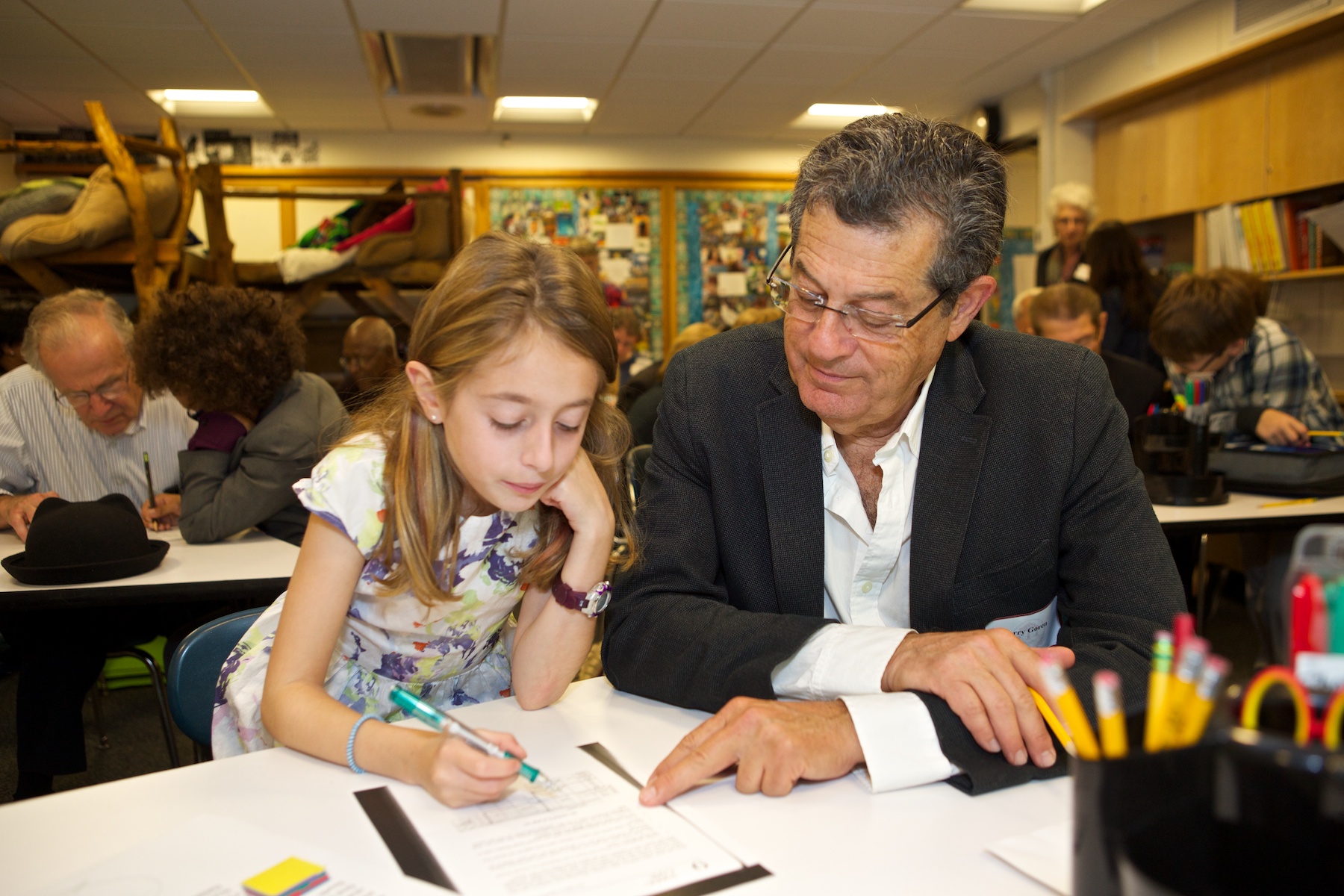 Over the past five years I had heard a lot about her. My granddaughters, Lily and Ada, happily regaled me
with reports of the stimulating and engrossing activities (the girls called them fun) she afforded them. She read to them; took them on trips; taught them to write and draw and sing; and fueled their curiosity about the world. My son and daughter-in-law provided many snippets of her attentiveness to their children’s needs and interests. I heard she was friendly, smart, creative, engaging and attractive. As wonderful as this sounded I certainly was not ready to fall in love with her; after all she is 100 years old. But with one visit I am smitten. She was remarkable when she was born and she is even more so now. I love Foote School!

Grandparents are pushovers for whatever makes their grandchildren happy; I am no exception. But as a retired educator I am not such a pushover for schools. I have planned, implemented and attended many grandparent day events. That said, Foote School’s 2015 Grandparents Day was wonderfully organized, entertaining, informative and engaging—and it was fun!

The staff and parent volunteers created a welcoming mood that, if the mix of visitors at my table was representative, was shared by all 400-plus grandparents and special friends in attendance. Carol Maoz’s welcome was the perfect sendoff to classroom visits. The classes I saw were thoughtful and creative. The kids were, as promised, happy, engaged and having fun. Both my granddaughters, to my great joy, bested me in the classroom activities.

After snack, I made the difficult choice of which minicourse to attend. While the music and art selections tempted me, and the excitement of science and technology was enticing,I decided to go back in time to my new love’s beginnings; along with 25 or so others, I joined Liam Considine and Lauren Goldberg around a Harkness table in the innovatively designed Jonathan Milikowsky Science and Technology Building. There, we learned how in the first decades of the 20th century, New Haven school leaders embraced enlightened beliefs and practices about education that emphasized experience-based, child-centered learning. This progressive thinking, derived from the work of John Dewey and other influential leaders, guided Martha Babcock Foote as she established Foote School in 1916.

The child-run, all-school assembly highlighted the connection between these progressive beginnings and the school’s present practices by showcasing confident students artistically and enthusiastically reading imaginative poems written by former Foote students from the school’s early years until today. This demonstration of the century-long continuum of the school’s emphasis on creativity—and its focus on the growth of mind and spirit—was joyfully exhibited by students in the classroom, as audience members and on stage. It confirmed for me that the school’s original values still guide the thinking and practice of teaching at Foote today.

As I have been since hearing about her in the early years of Lily and Ada’s schooling, I am pleased that Foote is still a happy, nurturing experience for them. However, when I left the Hosley Gym, I knew there was more to it. By working hard to be true to its progressive beginnings, to the vision and forethought of its founder, Foote teachers, administrators and staff continue to create a feeling of community that Martha Babcock Foote would proudly recognize.

As I said, I didn’t plan on falling for this old girl, but I think I have.

Jerry Goren is a retired educator who served as principal of the independent Oakwood School in North Hollywood, California, and coordinator of the Law and Public Service Magnet at Susan Miller Dorsey High School in Los Angeles. He is the proud grandfather of Lily Goren ’20 and Ada Goren ’23.

The article originally appeared in the spring 2016 issue of Foote Prints magazine.